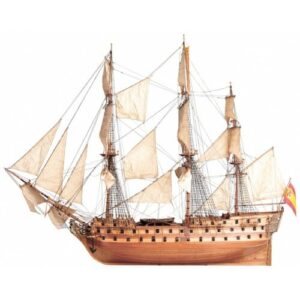 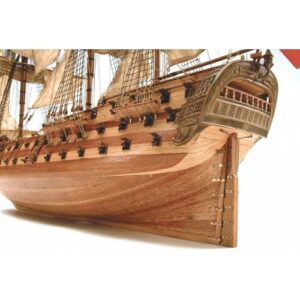 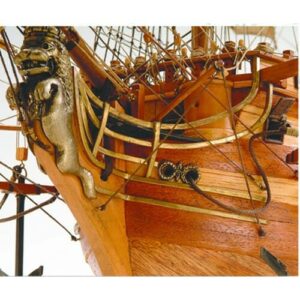 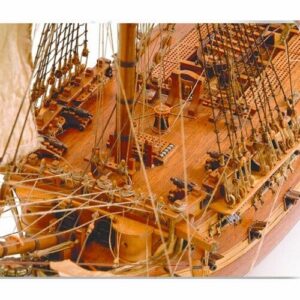 Splendid 1:90 scale model of the Spanish ship San Juan Nepomuceno, boat whose origin is located in Cantabria. It belonged to the Spanish Armada between 1766 and 1805, and it had 74 cannons. It was captured in Trafalgar by the British. The model includes all the pieces needed to complete the model: wood, metal, thread, sails… You can build it with step-by-step instructions.

Discover the Spanish ship San Juan Nepomuceno thanks to the wooden model of this online warship with 74 cannons. It belong to the Spanish Armada of the XVIII Century. This galleon is a beautiful example of the heroism and gallantry of the Spanish sailors widely demonstrated in the Battle of Trafalgar.

Constructed in the shipyards of Guarnizo (Cantabria) in 1765, the San Juan Nepomuceno fulfilled different performances until in 1803 it was placed to the control of Cosme Damián Churruca.

Two years later he would take part in the Battle of Trafalgar forging his legend: severely wounded and surrounded by up to 6 English ships, Churruca forbade his officers to surrender and ordered to continue fighting.

After the death of Churruca and his second commander, the commanding officer ordered to surrender by adding by hundreds the wounded and deceased on board. Captured by the Royal Navy, the San Juan Nepomuceno would be towed to Gibraltar and exposed to visitors, who had to be discovered in respect to enter the captain’s chamber.

Construct your scale model 1:90 of San Juan Nepomuceno, famous ship of the Spanish Armada. Its design by means of false keel and frames about its assembly to the one of the real ship.

The modeling kit contains high precision laser-cut board parts, fine woods, brass, cast iron and fabric. For assembly, you can follow our complete step-by-step instructions in four languages, accompanied by the full-scale drawings of the completed boat. In this way, you will realize your replica of this legend of Spanish navigation.