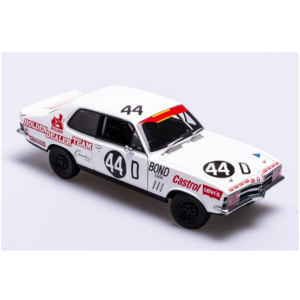 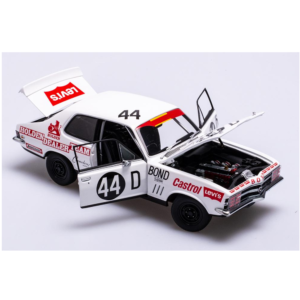 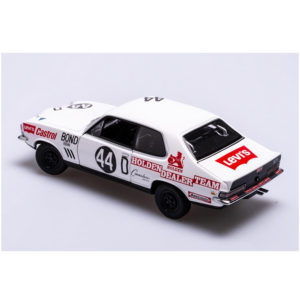 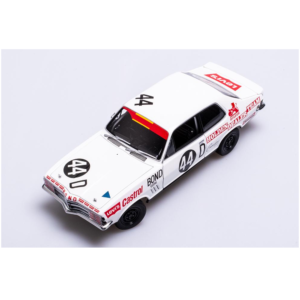 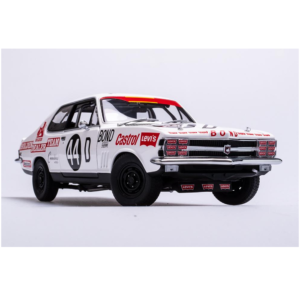 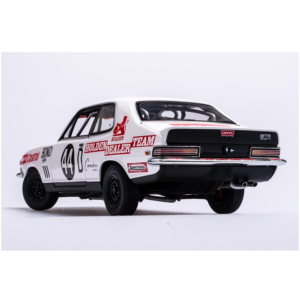 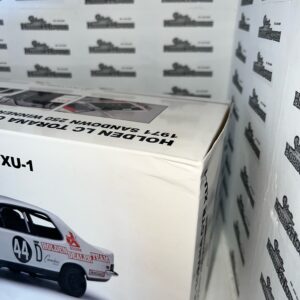 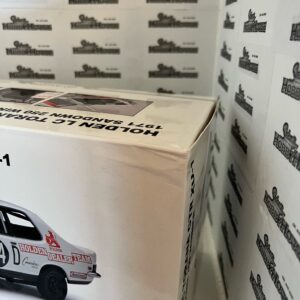 Box has damage as per photos.

Traditionally the lead-in race to the Bathurst event, Melbourne’s endurance classic has been known by many different titles and held over a variety of distances over the course of its history.
Back in 1971 it was known as the Sandown 250 held for Series Production touring cars, less modified vehicles than those that competed annually in the Australian Touring Car Championship, but the same cars that would take to the Mountain a month later.
Round 3 of that year’s Australian Manufacturer’s Championship, the Sandown race that year was a classic ‘David and Goliath’ contest with the role of ‘David’ played by the six-cylinder Toranas and ‘Goliath’ played by the thumping V8 Falcon GT-HOs.
Firth’s HDT entered a pair of the new LC Torana XU-1s to be driven by Bond and Peter Brock, cars that were greatly improved over the previous year’s model – and appeared in an all-new white livery carrying backing from Commodore Motels, Castrol and Levi’s jeans.
The LC Torana GTR XU’1 ‘Bathurst’ had a new camshaft that had greater lift and revised valve timing, a baffled rear axle housing that helped by reducing oil surge around high speed corners, a new cylinder head, a modified oil pump pickup, new clutch plate, stronger road wheels and a larger capacity radiator.
Also available was the Australian four-speed M21 gearbox as introduced on the HQ sedan range with much closer ratios than previously available for Torana drivers.
Bond qualified his #44D XU-1 third on the grid, lapping in 1m23.3s, 1.9-seconds slower than the pole time of Allan Moffat’s factory XY GT-HO Falcon. The Bryan Byrt-entered XY of Bob Skelton and Phil Barnes was second fastest with Brock’s teammate Bond qualifying fourth and joining him on the second row of the grid.
The 130-lap race would prove to be one of survival rather than speed, especially given the pair of factory Falcons of Moffat and John French were out within eight laps and several Torana drivers found themselves in troubles with gear selector problems.
Bond eventually worked his way into the lead, moving by the Skelton Falcon on around one-thirds race distance, and from there the little Torana wasn’t to be topped.
Gearbox issues had delayed his teammate Brock and the Bond car also didn’t escape unscathed – the eventual race winner completing the last lap in second gear to ensure he could cruise home to claim the chequered flag.

Limited edition only 402 pieces made worldwide with COA