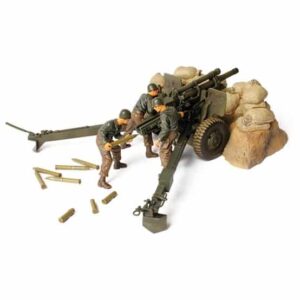 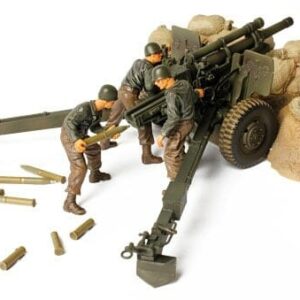 The 105 mm M2A1 (M101A1) howitzer was the standard light field howitzer for the United States in WWII, seeing action in both the European and Pacific theaters. Entering production in 1941, it quickly entered the war against the Imperial Japanese Army in the Pacific, where it gained a reputation for its accuracy and powerful punch. The M101A1 fired 105 mm high explosive (HE) semi-fixed ammunition and had a range of 11,200 metres (12,200 yd), making it suitable for supporting infantry.

The Forces of Valor® M2A1 Howitzer is produced in both die cast metal and plastic. The wheels roll includes a crews. This replica is of a M2A1was deployed in France in 1944.

Constructed of both die cast metal and plastic.